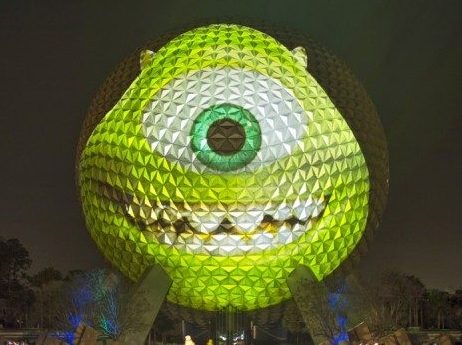 ORLANDO, Florida -- The Walt Disney World Resort will kick off a "Monstrous Summer" by keeping the Magic Kingdom Park open for 24 hours nonstop during the 2013 Memorial Day Weekend from 6 a.m., May 24 to 6 a.m., May 25, 2013, Eastern Daylight Time.

The oversized fun of a 24-hour Disney park "All-Nighter" called for an equally epic announcement, and the huge sphere of Spaceship Earth at EPCOT was transformed from Disney Parks icon to Disney•Pixar "Eye-con," becoming a 180-foot-tall, fully-animated Mike Wazowski, the loveable green-bodied, one-eyed monster who joins best pal James P. Sullivan ("Sulley") in the prequel to Monsters, Inc., this summer as college students with hopes of becoming Scarers.

The Magic Kingdom will feature a Monsters University theme where Mike and Sulley will be the Grand Marshals of the "Celebrate a Dream Come True" day parade – complete with pomp and circumstance – and make appearances in Tomorrowland.  Guests also will find extra entertainment throughout the day and night, including characters in their pajamas in Town Square during the late night and early morning, and late-night dance parties in and around the courtyard of Cinderella Castle.

The Walt Disney World Monstrous Summer includes new offerings and popular favorites in all four parks. This is the first summer for the New Fantasyland and an interactive "Pirates Adventure" game at the Magic Kingdom, a newly re-imagined Test Track at EPCOT, a new Disney Junior show, featuring Sofia The First and Doc McStuffins, at Disney's Hollywood Studios, plus Wilderness Explorers at Disney's Animal Kingdom.

For more information on Monstrous Summer, check out http://www.disneyparks.com/MonstrousSummer