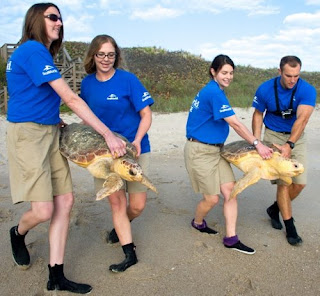 TITUSVILLE, Florida -- 14 sea turtles -- 11 Kemps Ridley and three loggerheads -- were returned to the Atlantic Ocean off Canaveral National Seashore just east of Titusville this morning after rehabilitating at SeaWorld Orlando for several months.


These sea turtles were brought to SeaWorld Orlando last December by a U.S. Coast Guard Airplane after being rescued just off the coast of Cape Cod, Massachusetts due to symptoms they suffered from cold stress.

After being medically cleared for today’s return, the park’s Animal Rescue Team transported the 14 turtles to the Brevard County beach. 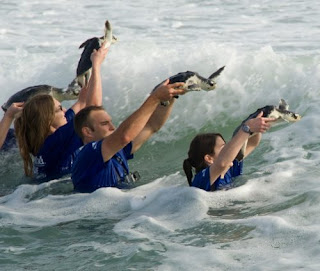 In collaboration with the government and other members of accredited stranding networks, SeaWorld Parks & Entertainment operates one of the world’s most respected programs to rescue ill and injured marine animals, with the goal to rehabilitate and return to the waters. SeaWorld animal experts have helped more than 22,000 animals in need - ill, injured, orphaned and abandoned - for more than four decades.

So far this year, SeaWorld Orlando has rescued nine turtles and returned 20.