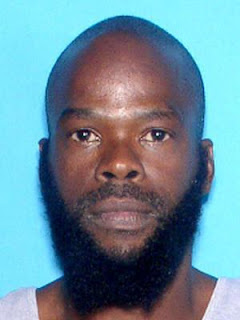 PALM BAY, Florida —Palm Bay police have taken into custody a a suspect who fled from a traffic stop in the area of San Filippo Drive and Wyoming Drive in the city’s southeast area last night.

At approximately 9:45 p.m., Cpl. Mike Smith and Officer Tyler Fooks stopped a vehicle near that intersection.  The driver, later identified by police as 42-year-old John Kitchen, immediately fled on foot.

As the suspect was fleeing, he allegedly pointed a gun at the police officers but no shots were fired.  A perimeter was established in the area and the Brevard County Sheriff’s Office Aviation Unit, STAR is assisted with an aerial search.

Unable to locate the suspect, police asked the public to be on the lookout for a black male, 5’10” tall, weighing approximately 150-160 pounds, who was approximately 30 years old wearing a gray tank top and red shorts.

A citizen spotted Kitchen walking along Wyoming Drive and alerted officers who then quickly surrounded him and took him into custody.
Labels: Palm Bay