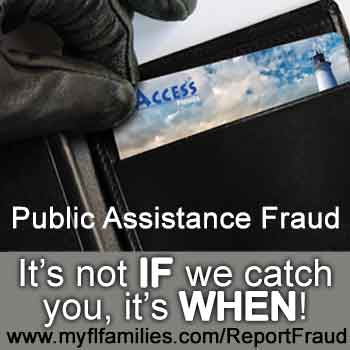 Florida is the first state in the nation to implement aggressive front-end fraud prevention technology to ensure benefits go to Floridians who are in need.

Earlier this year, DCF was granted a waiver from the federal government to implement first-of-its-kind technology to ensure that individuals applying for public assistance benefits online are who they say they are.  More than 90 percent of the five million annual benefits applications are received online through the DCF ACCESS system. The new technology is currently being piloted in the Central Florida area.  The pilot began in March and DCF claims that it has demonstrated three times the fraud prevention value anticipated.

“Florida ranks number one in the nation for identity theft, and for far too long criminals have been gaming our systems and stealing from taxpayers and Floridians who are truly in need,” Secretary David Wilkins said. “Implementing technology that has been successfully used in the private sector will allow us to catch more of these cheats on the front-end while we continue to utilize modern investigative strategies to fight fraud in Florida’s public assistance programs.”

DCF will also be working with the new EBT card vendor to implement innovative fraud solutions which are on track to prevent an additional $4 million in fraud this year.  Through this effort, DCF also anticipates an increase in fraud referrals to law enforcement for investigation, arrest and prosecution.

In 2011, Secretary Wilkins created the Office of Public Benefits Integrity, a team dedicated to rooting out fraud in public assistance programs. In just a little over two years, the office saved more than $135 million through efforts to prevent public assistance fraud and collect benefit overpayments.