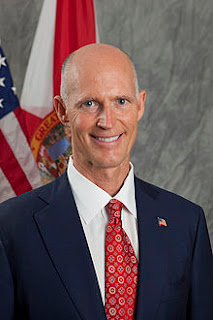 “As a father and a grandfather, texting while driving is something that concerns me when my loved ones are on the road. Governor Scott said.  "The 100 days between Memorial Day and Labor Day are known as the deadliest days on the road for teenagers.  We must do everything we can at the state level to keep our teenagers and everyone on our roads safe.  I cannot think of a better time to officially sign this bill into law.”

The law prohibits a person from manually typing or entering multiple letters, numbers, symbols or other characters into a wireless communications device.  This includes text messaging, emailing and instant messaging through smart phones.  But there are many exceptions to the texting ban such as using a vehicle's GPS navigation or reporting a crime or emergency to law enforcement.

Like the way the Florida seat belt law used to be, it is a secondary offense, meaning police cannot pull someone over simply for texting.  Instead, another traffic violation must occur and police can then write-up the texting offense as an additional non-criminal, non-moving traffic citation for the first offense.  Second or subsequent offenses within 5 years become moving traffic violations.


According to statistics published by the National Highway Traffic Safety Administration, a driver is 23 times more likely to get into an accident when texting while driving.

“We applaud Governor Rick Scott for signing this important legislation," Marshall Criser, AT&T Florida- State President said.  "Through the commitment of Sen. Nancy Detert and Representative Doug Holder, as well as the Governor and the Legislative leadership, Florida has reinforced the message that texting while driving is a deadly habit. It’s a simple message. No text is worth dying for, It Can Wait.”