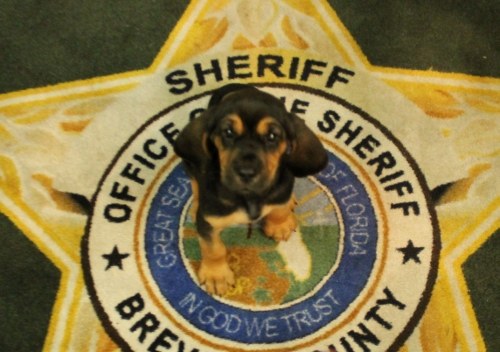 Montana answered calls for missing children, missing persons, suspects that fled from a crime scene, and also assisted with other investigations.  Notably, Montana assisted with the recapture of an escaped inmate in 2007 and located a missing and endangered child in 2012, that gained him and his handler a nomination for the Tracking and Trailing Team of the Year award as part of Florida Missing Children's Day.

In all, K-9 Montana answered hundreds of calls for service and became the longest, continuous service bloodhound for the Sheriff's Office to date.  Montana will still be close to the Sheriff's Office, as he is being adopted by Corrections Deputy Emily Rhodes as part of her family.

The Sheriff's Office is asking for the public's support in submitting possible names for the puppy.

The names will be accepted via the Brevard County Sheriff's Office Official Facebook page.  The winning name will be selected on Friday, June 21, 2013.  The winner will be invited to a swearing-in ceremony where the puppy will be officially named.

The Sheriff's Office said in a statement that "the puppy's name is very important as it will serve him through his entire career."   The new puppy will be trained and handled by Field Training Officer Jared Conaway.