Pee Wee, One of the Original Brevard Zoo Animals, Dies 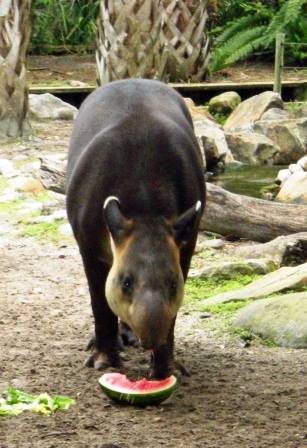 MELBOURNE, Florida --  Pee Wee, a male Baird’s tapir and one of the original Brevard Zoo animals, passed away during a medical procedure on Wednesday, June 12, at the Zoo.

Zoo official say that Pee Wee was 21-year-old and had been suffering for some time with a chronic toe infection. He died during a procedure to surgically treat the infected toe. Pee Wee lived at Brevard Zoo since it opened in 1994 and was popular with Zoo guests.

Weighing in at 550 pounds, he was housed with Josephine and sired six offspring during his time at the Zoo - including Tootsie, the baby girl Baird’s tapir, born on April 6. Zoo ofiicials say that Josephine and Tootsie are doing well, but Pee Wee will be missed.

Baird’s tapirs historically have been found in southeastern Mexico through northern Columbia to the Gulf of Guayaquil in Ecuador.  They are the national animal of Belize where they are known as the "mountain cow."

The Zoo noted that wild populations of Baird's tapirs are declining and are considered endangered. Surveys of the population and habitat suggest that there are less than 5,500 individual Baird’s tapirs remaining in the wild.

In early 2013, the captive population consisted of 22 males and 10 females in 19 Association of Zoos and Aquariums (AZA) accredited facilities, including the Brevard Zoo. Since 2005, Brevard Zoo has funded tapir field conservation projects through the Institute for Ecological Research in Central America.

The Zoo provided funding for four radio collars to track Baird’s Tapirs so researchers could collect important data regarding habitat use and foraging behaviors. The Zoo is currently highlighting the Institute for Ecological Research in its "Quarters for Conservation" program. This program is expected to provide up to $3,000 to support tapir field conservation programs this year.

To learn more about Brevard Zoo’s Quarters for Conservation program, visit BrevardZoo.org and click on Conservation.