Woman In Wheel Chair Robbed After Ordering From McDonald's 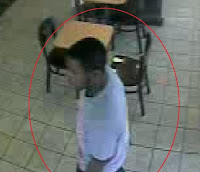 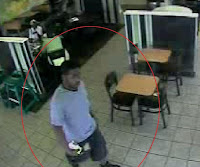 COCOA, Florida -- At approximately 10:20 a.m., a wheelchair-bound woman was ordering food inside a McDonald’s restaurant located at 927 Dixon Boulevard, in Cocoa, Florida.

While ordering the food, she was approached by a man who offered to assist her.  The man allegedly offered the victim a deal on a gasoline-powered wheelchair that he purportedly had at his house.  The man then convinced the woman to follow him in her wheelchair to a nearby abandoned house.

When the woman became suspicious - she attempted to leave.  The man then allegedly grabbed her, forcibly removed her fanny pack and fled the scene.  The pack contained the woman's wallet and currency.

The suspect is described as a black male in his 20’s, approximately 5’10 tall, weighing between 160-170 lbs., with short black hair.  The suspect was wearing a gray t-shirt with black drawstring shorts and black tennis shoes.

All calls to CRIMELINE are confidential, and callers can remain anonymous and be eligible for a reward of up to $1,000 for information leading to an arrest.