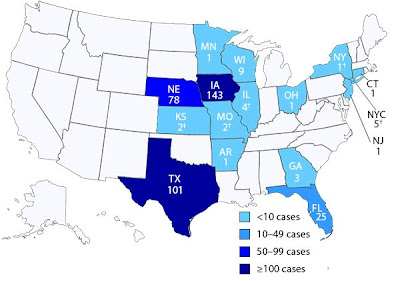 The U.S. Center for Disease Control announced that state health officials in Nebraska and Iowa have performed investigations within their states and have shared the results of those investigations with CDC.  Based on their analysis, Cyclospora cayetanensis infections in those two states are linked to a salad mix.


Without identifying the bagged salad mix brand names linked to the Cyclospora outbreak, Nebraska and Iowa state health officials said that the bagged salad mix includes iceberg and romaine lettuce along with red cabbage and carrots which "came through national distribution channels."


In the U.S., most of the illness onset dates have ranged from mid-June through early July with at least 21 persons reportedly have been hospitalized in three states.  It is not yet clear whether the cases from all of the states are part of the same outbreak.  The CDC says that no common events (e.g., social gatherings) have been identified among the case patients.


Currently, the average Florida case age is 57.5 years, with a range of 22 - 78 years of age. The current stomach bug case count consists of 14 females and 10 males.  Onset dates of Cyclospora cases in Florida range from the beginning of June to mid - July.


So far, Florida Department of Health officials say that they have found no links to common restaurants found among the 24 cases, as in other states.  Additionally, no common food items or events, like a social gathering, have been identified among those affected.


As of July 29, DOH officials say that there have been five patients hospitalized in Florida who were later released.


Who is at risk for Cyclospora infection?


How long can the symptoms last?


How is Cyclospora infection prevented?