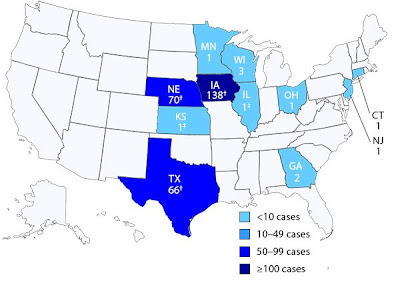 On June 28, 2013, the U.S. Center for Disease Control was notified of two laboratory-confirmed cases of Cyclospora infection in Iowa residents who had become ill in June and did not have a history of international travel during the 14 days before the onset of illness.   Since that date, the CDC has been collaborating with public health officials in multiple states and the U.S. Food and Drug Administration (FDA) to investigate an outbreak of cyclosporiasis.

The CDC reccommends avoiding food or water that might have been contaminated with stool may help prevent Cyclospora infection. People who have previously been infected with Cyclospora can become infected again.
Labels: CDC Health