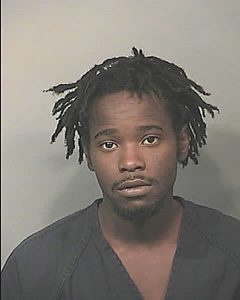 MERRITT ISLAND, Florida -- Around 1:30 p.m. on Monday, Brevard County Sheriff's Deputy Daniel Hammond conducted a traffic stop of a white Lexus at the intersection of North Tropical Trail and Mytrice Avenue in Merritt Island, Florida.  During the traffic stop, and after obtaining identification of the driver, 22-year-old John Fredrick Meadows of Merritt Island, the deputy saw a handgun in the vehicle.

After the handgun was observed, Meadows allegedly fled from the traffic stop, driving in a reckless manner, and eventually crashed.  Deputies say Meadows was then observed running from the accident scene carrying a handgun.

The investigation led deputies to the Courtney Palms Apartments located at 700 North Courtenay Parkway where they found and arrested Meadows without incident.  Before Meadows’ arrest, two handguns were also seized from his apartment.

Meadows is charged with Resisting without Violence, Aggravated Fleeing or Attempting to Elude a Law Enforcement Officer, Possession of a Firearm in Commission of a Felony and Leaving the Scene of an Accident with Property Damage.  He is currently being held at the Brevard County Jail Complex in Sharpes on a No Bond status.

Anyone with information about this investigation is urged to call CRIMELINE at 1-800-423- TIPS (8477).  All calls to CRIMELINE are confidential and callers can remain anonymous and be eligible for a reward for information leading to an arrest.