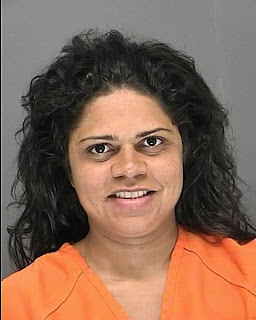 VOLUSIA COUNTY, Florida -- "I thought she was playin'," a flabbergasted man told deputies after watching a woman drive away in his tow truck Wednesday morning.  He had responded to help the woman when her rental car broke down on I-95.  She asked if she could take his yellow flatbed truck to New York and the driver, thinking she was joking, said "sure." But then he followed up with a serious no. Nonetheless, when he turned his back to her, Angela Estrella jumped into the driver seat and sped away northbound, allegedly without his permission. The wrecker company tracked the vehicle's GPS, though, and Estrella was found at a gas station in Palm Coast, Florida. She was arrested and charged with grand theft of a motor vehicle.

The unusual incident started at about 9:30 a.m. when a deputy spotted a disabled vehicle at the 275 mile marker on northbound I-95 near Ormond Beach, Florida. He pulled over, checked on Estrella and radioed in a request for a tow truck.  Since everything seemed to be OK, the deputy then left. A few minutes later a wrecker from Universal Towing arrived. As he spoke with the 37-year-old woman, she asked if he could take her to New York. He said that he couldn't go that far. Next, she asked if she could take his truck. He didn't take her seriously and said "sure." She responded, "Really?" The 46-year-old driver allegedly told her no and then used his cell phone to call the rental car company that owned the broken down vehicle. When his back was turned, Estrella got into the wrecker and drove away, nearly side-swiping a semi truck in the process.  The tow truck driver then called the Volusia County Sheriff's Office for help.

The tow truck company was able to track the flatbed with a GPS system and reported that it had stopped at a gas station at 6020 SR 100, Palm Coast. A Flagler County Sheriff's deputy found Estrella inside the store buying diesel.  A Volusia deputy responded and arrested Estrella, who deputies say refused to make a statement about the theft. She was booked into the Flagler County Detention Facility and then was later transferred to the Volusia County Branch Jail where she is currently in custody.

If Estrella seems familiar to Central Florida readers, nearly a year ago the woman was caught on a Florida Highway Patrol trooper's dash cam video during a high speed police chase through Osceola County with her children inside the vehicle.
Labels: Florida Florida Woman Volusia