At 12:48 p.m., Melbourne Police officers were called by members of Probation and Parole to assist them in looking for 26-year-old Gabriel Guzman (also known as Gabriel Rivas Jr.). 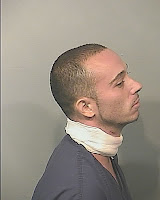 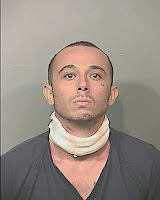 Probation and Parole officers had originally gone to a home on Pheasant Court in an attempt to locate Guzman for allegedly removing his court ordered electronic monitoring device.  Guzman also had an active felony warrant for violation of probation related to charges of lewd or lascivious battery on a victim 12 to 16 years of age.

Once the probation officers knocked on the front door to the residence, police say Guzman ran out the back and fled on foot. Melbourne Police officers arrived on scene and began to search for Guzman who was reportedly running through yards in order to escape.

Officer Johnny Rodriguez and K-9 Raven also responded to assist in the search. Police say Raven tirelessly followed Guzman’s scent throughout neighborhood streets until he showed strong interest in an area near some bushes on Partridge Court.  At that time, police say Guzman emerged from the brush and grabbed Raven around the neck and head, lifting the dog off of the ground.

While giving the command, “let go of the dog,” Officer Rodriguez intervened by grabbing Guzman by the arm.  Guzman allegedly continued to fight with Raven, grabbing him by the throat and ignoring the officer’s commands.

After being bit three times during the struggle, police say Guzman finally submitted and was taken into custody. Guzman was taken to an area hospital to be medically treated for minor injuries to the leg, arm and chin. He later taken to the Brevard County Jail in Sharpes, Florida. Raven was not injured during the incident and, according to Officer Rodriguez, “He’s doing just fine today.”