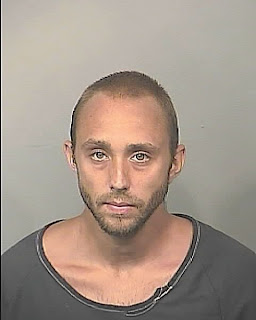 COCOA BEACH, Florida -- Today at approximately 1:24 p.m., Cocoa Beach police officers responded to the beach-end of Osceola Lane in response to reports of a suspicious person.

"Chip William Vaughn, 29, of no known address, was observed riding up to a group of parked cars and maneuvering between two of them," Cocoa Beach Police spokesperson Major Jay Harmon said in a release.  "While looking to see if he was being observed, he produced a sledge hammer and began striking the window of one of the cars. Realizing he had been observed, Vaughn fled but was stopped by witnesses who detained him until police arrived."

Vaughn was taken into custody and charged with Burglary to a Conveyance and Possession of Burglary Tools.  Stolen property from victims yet-to-be-identified was allegedly discovered in his possession.

According to Harmon, the Cocoa Beach Criminal Investigations Division had identified Vaughn as a suspect in two previously reported car burglaries in Cocoa Beach.   In both cases, Vaughn allegedly pawned the stolen property within an hour of the theft. Subsequent to today’s arrest, he has since been charged with two counts each of Burglary, Theft, Dealing in Stolen Property and False Verification of Ownership for the previous incidents.

According to court records, Vaughn had just been arrested on July 14 and charged with loitering, prowling, and narcotics possession by the Brevard County Sheriff's Office.  Vaughn posted bond in the amount of $1,000 for those charges on July 21.
Labels: Cocoa Beach crime