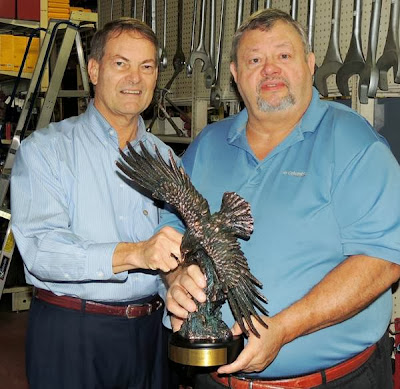 ROCKLEDGE, Florida —Travis “Mac” Osborne, owner of S.F. Travis & Company in Cocoa, was recently honored by the Rockledge Rotary for his long-time commitment, volunteerism and charitable support within the community. The Rotary membership presented Osborne with its first-ever “Four Way Test” award.

The award is named after the pledge all Rotarians from clubs throughout the world recite to recognize the virtues members must uphold and follow in their personal and business relationships. It is based on four inspirational tenets related to truthfulness, fairness, goodwill and friendship.

“Mac epitomizes what it means to be a Rotarian,” said Wes Houser, Rockledge Rotary club president. “He is someone who has consistently and generously supported this community and those in need.  He has truly lived his life and managed his business in keeping with the tenets of the Four Way test. We’re honored to provide him with this recognition.”

For several decades, Osborne has operated S.F Travis & Company, a hardware and supplies store established more than 100 years ago by his great-grandfather and known to carry unique and hard-to-get items. He is a founding member of the Rockledge Rotary, served as its past president and has been named a Paul Harris Fellow, a high recognition based on service and charitable giving within Rotary International.

Among his many community involvement activities, Osborne has served as a board member with the Cocoa Village Playhouse and Bridges (formerly ARC), and has served as a supporter, volunteer and fundraiser for a variety of organizations, such as the Brevard Zoo, Challenger Youth Baseball League, Rotary Park, Teen Missions, Hidden Potentials, the Russell Home, Ronald McDonald House, the Society of St. Vincent de Paul, the Central Brevard Sharing Center, various food banks, Eagle Scouts, and numerous Veterans and Memorial Day events.