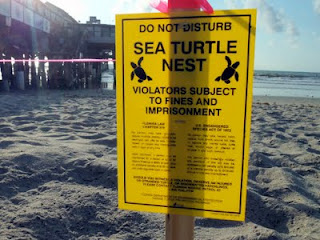 COCOA BEACH, Florida -- The number of green sea turtle nests in Florida this year was more than double the count of the previous highest year.  Biologists with the Florida Fish and Wildlife Conservation Commission (FWC) have documented more than 25,000 green turtle nests on 26 index beaches in the state in 2013.

“We are astounded and pleased by the high number of green turtle nests documented in 2013,” said Dr. Blair Witherington, FWC research scientist. “It looks like the years of conservation efforts for this endangered species are paying off.”


FWC-trained and authorized surveyors across the state monitor nests on a set of index beaches that span nearly 250 miles and are the focus of the Index Beach Nesting Survey. These surveys began in 1989. Index surveyors follow firm counting guidelines, making it possible for FWC researchers to use the data from these beaches to identify trends.


The trend for green turtles shows an exponential increase in nesting over the past 25 years. In 1989, biologists documented only 464 green turtle nests on index beaches. In 2013, this index nest count was 25,553. The index count represents about 70 percent of green turtle nesting statewide.


Leatherback sea turtle nest counts have also risen dramatically over the past quarter century. However, the 2013 count of 322 leatherback nests on index beaches was 193 lower than last year.


Loggerhead sea turtles, the most prevalent sea turtle species on Florida’s shores, accounted for 44,810 nests on index beaches this year, down from 2012’s near-record count of 58,172 nests. Although this federally threatened species nests on the same beaches as green turtles and leatherbacks, loggerheads have not shown the recovery in numbers seen in nesting by the other two species. The high level of loggerhead nesting last year followed a pronounced drop in the species’ nest counts between 1998 and 2007.

8 Charged With Trading In Sea Turtles For Human Consumption