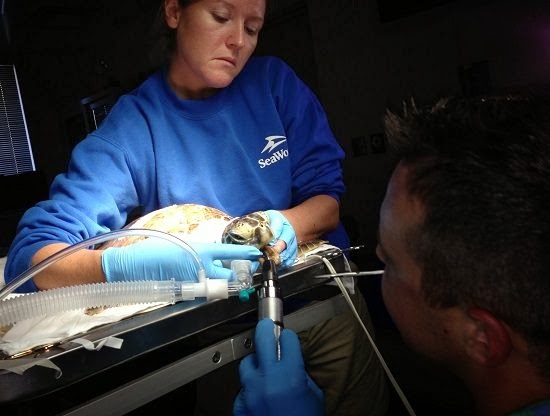 CAPE CANAVERAL, Florida -- This morning, a veterinarian performed surgery on a rescued sea turtle, removing two fishing hooks from its throat and cloaca with the assistance of SeaWorld Orlando’s Aquarium team.

The sea turtle was found by the Sea Turtle Preservation Society - an organization committed to sea turtle education, research and rescue – who also assisted in the animal’s transport.  The turtle, a juvenile weighing approximately 11 pounds, was rescued near Cape Canaveral, Florida.

The turtle arrived at SeaWorld in Orlando, Florida on Wednesday and underwent surgery this morning following x-rays and blood work evaluation.  According to the veterinarian who performed the procedure, Dr. Stephen Cassle, both of the fishing hooks were successfully removed – one from its esophagus and one from the cloaca.  The turtle is doing well following the procedure, and his health will continue to be monitored over the next several weeks by the Aquarium department at SeaWorld Orlando.


So far this year, SeaWorld Orlando has rescued 59 sea turtles. SeaWorld official said in a release that it is the intent that, upon recovery, this sea turtle will be released back into its natural environment.

SeaWorld encourages anglers to help protect this endangered species, and other sea turtles, by making sure fishing line and trash is disposed of properly.  When fishing, use new "circle" hooks - sea turtles are less likely to swallow the circle-shaped hooks than traditional J-shaped, which cause suffocation or internal bleeding when swallowed.

Green sea turtles are an endangered species that normally lay over 100 eggs per clutch. To report someone disturbing a sea turtle nest or an injured, dead or harassed sea turtle call 888-404-3922 or dial  *FWC on a cellular device.

For 45 years, SeaWorld Parks & Entertainment has helped animals in need -- ill, injured and orphaned.  More than 22,000 animals have been rescued by our experts.‪ SeaWorld’s animal rescue team is on call 24 hours a day, 7 days a week. Learn more about our passion for conservation and animal welfare at SeaWorldCares.com.