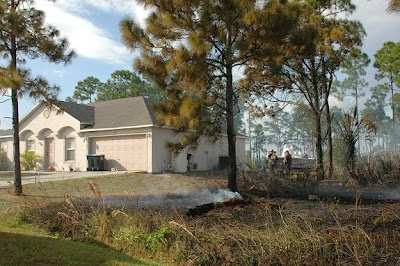 PALM BAY, Florida -- Palm Bay firefighters stopped a small - but fast moving - brush fire that threatened a home and a boat that was parked adjacent to the property.

Just before 2:30 p.m. on Wednesday, firefighters responded to the area of 3159 Wessel Avenue SE for reports of a vacant lot on fire.  Witnesses reported flames approximately 15 to 20 feet into the trees and quickly approaching the home at the corner of Wessel Avenue and Cogan Drive in Palm Bay.

When firefighters arrived, crews set up to prevent the fire from reaching the home.  The boat that was next to the home sustained minor damage from its close proximity to the fire even though firefighters were able to contain the fire to the vacant lot.

According to City of Palm Bay spokesperson Yvonne Martinez, the fire appears to have started at the roadside corner of the vacant lot.  However, the cause is currently undetermined and remains under investigation.

No one was injured during the fire.