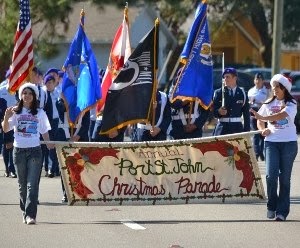 
The theme of the 2013 Port St. John Christmas Parade will be 'Songs of Christmas' and will begin at the intersection of Fay Boulevard and Waterloo Avenue in Port St. John, Florida.


The parade will travel east in the eastbound lane on Fay Boulevard until it reaches the intersection of Carole Avenue.