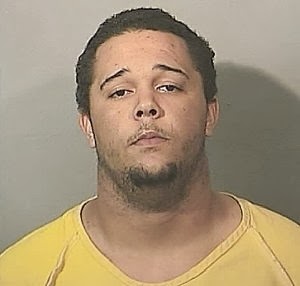 WEST MELBOURNE, Florida -- Last Wednesday around 2 p.m., West Melbourne police responded to a report of a robbery by sudden snatching at a WalMart located at 845 Palm Bay Road in West Melbourne, Florida.

According to police, an elderly woman was loading groceries when a suspect drove up and attempted to remove the victim’s purse.  The woman attempted to hold on to the purse straps but the suspect overpowered her and left with the purse.

The next day at approximately 4:45 p.m., West Melbourne Police were called out again for a report of a grand theft in the same parking lot where another elderly woman had her purse stolen.  During this crime, the suspect stole the purse from the grocery cart while loading groceries.

Soon after both thefts, police say that both victim’s credit cards were used at local businesses. After further investigation, West Melbourne Police Detectives were able to make an arrest in both cases on Friday.

Police have charged 18-year-old Auston M. Russell with 1 count of Robbery by Sudden Snatching, 2 counts of Grand Theft on persons 65 or older, and 18 counts of Fraudulent Use of Credit Cards.
Labels: Walmart West Melbourne