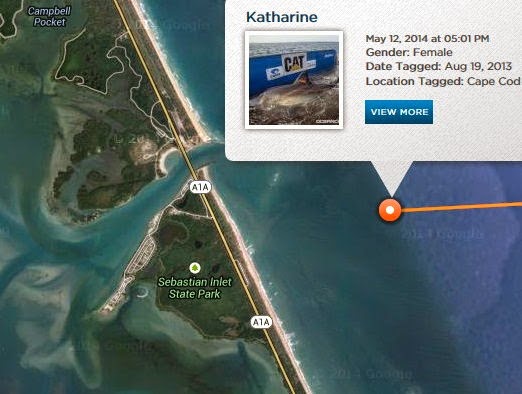 
MONDAY UPDATE: As of 10:35 a.m., the great white shark is approximately 5 miles east of Sebastian, Florida.


SUNDAY UPDATE: As of 12:38 p.m. on Sunday, the great white shark is approximately 8 miles east of Cocoa Beach, Florida.


COCOA BEACH, Florida -- As of 6:01 a.m. on May 11, 2014, a great white shark weighing over 2,000 pounds that was tagged with a radio transponder to be tracked by satellite has had its latest ping location just east of the Cape Canaveral Air Force Station.

The 14-foot great white shark, named Katharine, has remained just off the east Central Florida coast since May 8, 2014, swimming from Flagler County south to Volusia County, and then on to Brevard County on May 9.
Katherine picked up some speed overnight last night. She traveled over 5 miles southward in less than 9 hours.