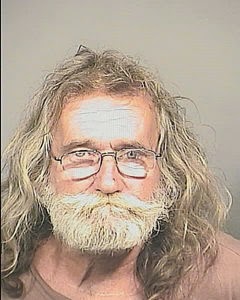 MELBOURNE, Florida -- Just before 8 p.m. on Thursday, Melbourne Police officers responded to British Performance, Inc. located at 1612 North Harbor City Boulevard in Melbourne for a fire. When officers arrived, they observed flames coming from a white pop- up style camper near the rear of the vehicle maintenance business.

While on scene, officers were approached by a nearby resident who stated she observed a man manipulating a propane tank on the camper prior to the fire. She told police that the man she saw was twisting knobs and moving the tank’s connectors before walking off. Once the man left the area on foot, the witness said she noticed black smoke coming from the propane tank before there was a loud burst and visible flames.

The witness was able to provide officers with a physical description of the suspect. A man matching the description given was soon located less than a half mile away near the Subway sandwich shop at 1377 North Harbor City Boulevard. The witness responded to that location and positively identified Russell Marquis as the man she saw touching the propane tank on the camper before it went up in flames.

Russell Marquis was then taken into custody for arson and burglary and transported to the Brevard County Jail.

A representative from the State Fire Marshal’s office also responded to conduct an investigation.

The camper sustained an estimated $5,000 in damage.
Labels: Melbourne