MIAMI, Florida -- As of 11 a.m. Eastern Daylight Time on Monday, August 25, 2014, the National Hurricane Center issued a Public Advisory due to the presence of Tropical Storm Cristobal and another area of disturbance that could form into a tropical cyclone in the Atlantic.


Tropical Storm Cristobal is located about 715 miles southwest of Bermuda and is moving north-northeast at 2 mph with sustained winds of 60 mph and higher gusts.  Cristobal is forecast to slowly pass east of the central Bahamas on Monday, far east of the Florida and Georgia coasts on Tuesday, and far southeast of the Carolinas on Wednesday. 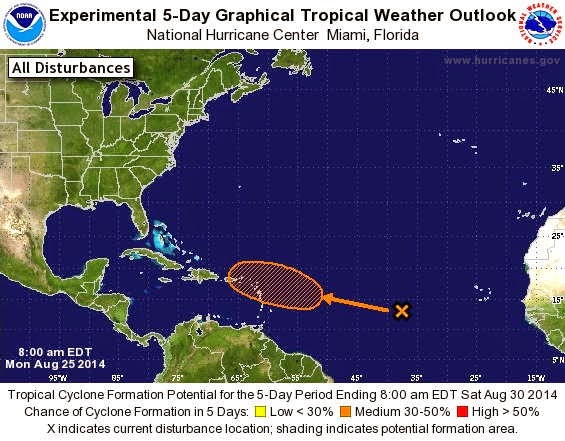 The other area of disturbance is a tropical wave located about 1100 miles west-southwest of the Cape Verde Islands that is producing disorganized showers and thunderstorms.

Conditions do not appear to be favorable for development during the next few days, but could become more conducive by the end of the week while the system moves westward to west-northwestward at about 15 mph.


This system has a medium chance (30%) of becoming a tropical cyclone within the next five days.  If this tropical wave develops into a tropical storm or hurricane, the next name for the 2014 Atlantic Hurricane season is Dolly.
Labels: Tropical Storm