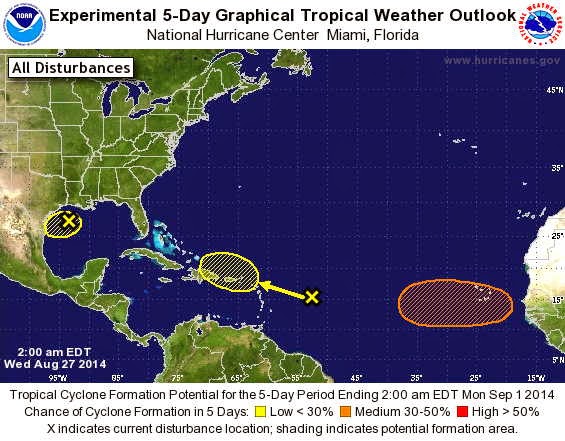 MIAMI, Florida -- As of 2 a.m. Eastern Daylight Time on Wednesday, August 27, 2014, the National Hurricane Center issued a public advisory due to the presence of three separate areas of disturbance that could form into three new tropical cyclones this week.


The disturbance that is most likely to become a tropical cyclone is a tropical wave forecast to move off the west coast of Africa late this week.  Conditions appear to be favorable for some development thereafter while the system moves westward at 10 to 15 mph across the eastern Atlantic.


This system has a medium chance (40%) of becoming a tropical cyclone within the next five days.


The second disturbance is a tropical wave located about 600 miles east of the Lesser Antilles continues to produce disorganized cloudiness and showers. Environmental conditions are not expected to be favorable for development of this system while it moves west-northwestward at about 15 mph.


This system has a low chance (10%) of becoming a tropical cyclone within the next five days.


The third disturbance is a trough of low pressure over the northwestern Gulf of Mexico is producing minimal shower activity. This system is expected to move west-southwestward over southern Texas and northern Mexico in a day or two with little or no development

This system has a low chance (10%) of becoming a tropical cyclone within the next five days.

If all three systems become tropical storms or hurricanes, the next three names for the 2014 Atlantic Hurricane Season are Dolly, Edouard, and Fay.
Labels: Tropical Storm