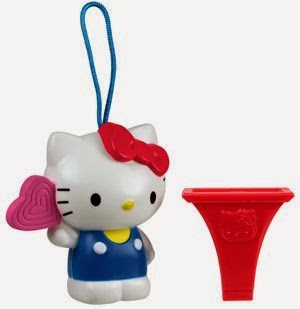 McDonald’s announced a voluntarily recall of a red whistle included with the Happy Meal Hello Kitty Birthday Lollipop Toy (#6) in the U.S. and Canada after the fast food giant recently discovered that components of the whistle can detach, posing a choking and aspiration hazard to young children.


McDonald’s said in a statement that it has received two reports of  children who coughed out pieces of the whistle.


McDonald’s is asking customers who have the toy to immediately take the whistle away from children and return it to any McDonald’s restaurant and receive a replacement Happy Meal toy and the choice of either a free yogurt tube or a free bag of sliced apples. The whistle can be removed from the figurine.  Only the removable whistle needs to be returned.  Customers can keep the figurine.


No other designs in the current Hello Kitty and Max Steel promotions are involved in this voluntary recall, nor are toys affected from previous Hello Kitty promotions.

The Hello Kitty Birthday Lollipop was number 6 in a series of Hello Kitty toys scheduled to be distributed on a rolling basis between October 31, 2014 and November 25, 2014 as part of the Hello Kitty 40th Anniversary Promotion.


Approximately 2.5 million whistles were manufactured in China.  But because of the duration of the promotion, the vast majority were not sent to restaurants.  Of the amount produced, McDonald's said that it recovered approximately 70% or 1.6 million of the whistles.