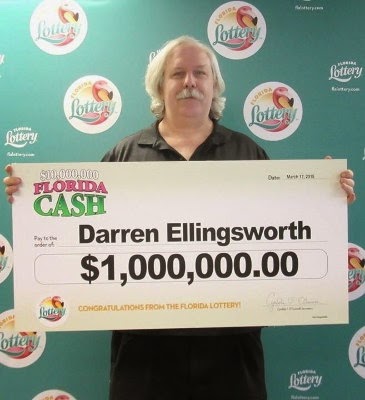 Ellingsworth chose to receive his winnings as a one-time, lump-sum payment of $760,722.45. He purchased the winning ticket from a 7-Eleven convenience store located at 1268 Aurora Road in Melbourne.  The retailer will receive a $2,000 bonus commission for selling the winning scratch-off ticket.

Ellingsworth said he is going to use some of his winnings to travel to Europe with his family. He is also planning to celebrate his 50th birthday in Las Vegas, Nevada later this year.

The $25 game features more than 11 million winning tickets and more than $624 million in total cash prizes. There are currently 42 $1 million prizes and three $10 million prizes remaining to be won. The game's overall odds of winning are one-in-2.88.
Labels: Florida Lottery Melbourne