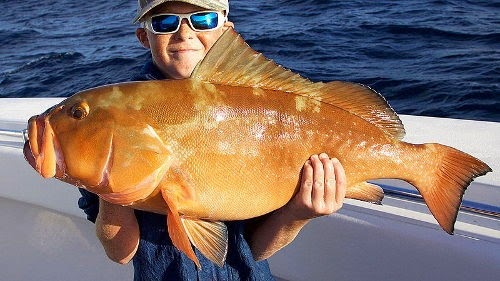 PORT CANAVERAL, Florida -- Anglers targeting grouper in Florida state waters of the Atlantic will be able to take home some of their catch beginning May 1, 2015 when the season for several species reopens to recreational and commercial harvest. The following species will reopen to harvest May 1: gag, black, red, yellowmouth, yellowfin and tiger grouper; scamp; red hind; rock hind; coney; and graysby.

The harvest of these species of grouper will remain open until Jan. 1, 2016. These species are closed annually from Jan. 1 through April 30 each year as a measure to ensure the long-term sustainability of Atlantic grouper species. State waters in the Atlantic are from shore to 3 nautical miles out.

Recreational anglers targeting these species may not take more than three grouper per person per day. Within this three-fish limit, anglers may possess only one gag or black grouper (not both). Due to recent changes, captain and crew of for-hire vessels are now allowed to retain recreational bag limits of grouper when the season is open.

Dehooking tools must be aboard commercial and recreational vessels for use as needed to remove hooks from Atlantic grouper, including reef fish.

More information about grouper bag and size limits, gear restrictions and fishing seasons, including a new map of the Atlantic and Gulf grouper fishing boundaries, is available online at MyFWC.com/Fishing; select “Saltwater Fishing” then “Recreational Regulations” and “Groupers.”

Captain and crew are now able to keep recreational bag limits of all in season snapper grouper species in Atlantic state and federal waters.

*Tiger grouper are not managed in federal waters. The above regulations apply only to harvest in state waters.