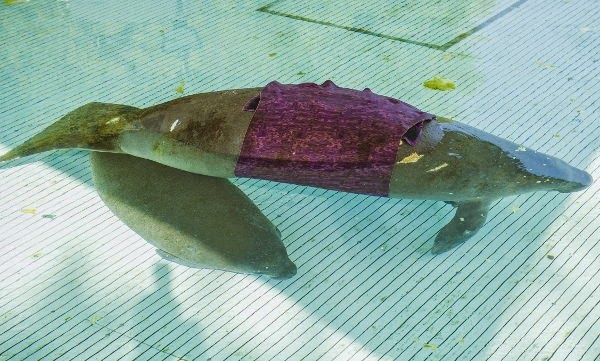 ORLANDO, Florida - While many human mothers were receiving flowers, cards and chocolates from their loved ones on Mother's Day, a mother manatee received a gift that would save her life -  a hot pink wetsuit from the SeaWorld Animal Rescue Team.

The SeaWorld Animal Rescue Team rescued the distressed manatee and her still-nursing calf on Mother's Day, May 10, 2015, after she was injured by a watercraft strike near Satellite Beach, Florida.

The 10-year-old mother manatee has a collapsed lung which creates buoyancy issues. According to SeaWorld, the condition is known as a pneumothorax - which was possibly caused by the blunt force of the boat striking the manatee. Not being able to float evenly in the water is a serious issue for a manatee that causes problems with feeding, swimming and coming up to the surface for air.

To treat the pneumothorax, the SeaWorld Veterinary Team needed to draw out trapped air and fluids from around the manatee’s lungs. So SeaWorld outfitted the 9-foot-long manatee with a 20 sq. ft. neoprene “manatee wetsuit” that the park designed 25 years ago for such rescue cases.  The wetsuit helps assist the 1,070 pound manatee with floating and also allows the team draw out trapped air and fluids.

The approximately 2 to 3-year-old calf was unharmed by the watercraft - but is still nursing and dependent on its mother. Rescuers say that it is important that the pair remain together as the calf continues to grow and learn from its mother. SeaWorld said that special considerations were made when using the wetsuit as part of the treatment so that it would not interfere with natural behaviors, such as the calf’s nursing.

So far in 2015, SeaWorld Orlando’s Animal Rescue Team has rescued 27 manatees and returned 27.