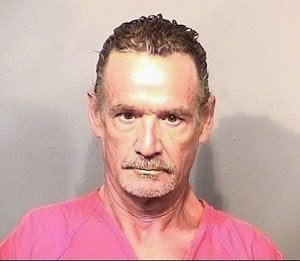 TITUSVILLE, Florida– An arrest has been made in the abandoned house fire that occurred at 19 North Park Ave in Titusville, Florida just after 3 a.m. on Tuesday.

The victim was identified by police as Jeremy Pileggi, 27, of Titusville.  Police say that both the suspect, 56-year-old Don Lyle Leach of Titusville, and the victim are homeless and were involved in a dispute with each other.

Investigators say that Leach was angry at Pileggi and intentionally set the fire. Investigators believe that Pileggi was likely sleeping in the abandoned house when Leach ignited a fire on the porch of the home.  Police say that it would have been particularly difficult for the victim to have escaped because most of the windows and doorways of the vacant house were boarded up.

A medical examination on Tuesday confirmed that Pileggi died as a result of the fire. Detectives were able to develop leads early in the case, including an eyewitness who saw the suspect running from the scene. Leach was taken into custody at the police department after being questioned by investigators. He was later booked into the Brevard County jail and charged with first degree murder and arson of a structure with people present.
Labels: crime Fire Rescue Titusville