SeaWorld Returns 3 Rescued Sea Turtles Back Into The Atlantic Ocean 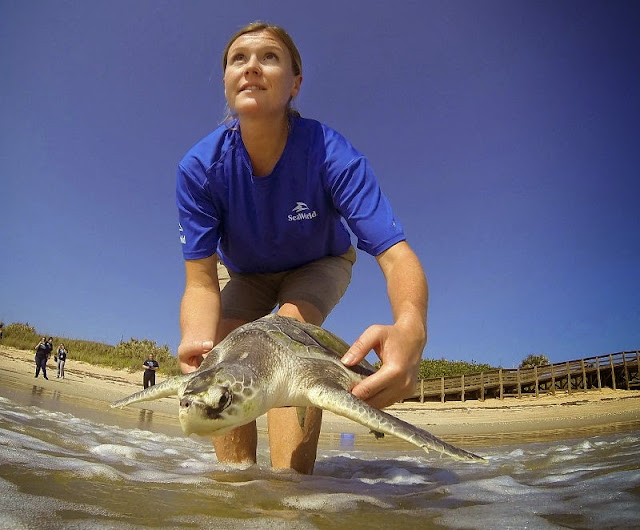 ORLANDO, Florida –  Three Kemp’s ridley sea turtles, the world’s most endangered species of sea turtle, were released into the Atlantic Ocean by a SeaWorld Orlando Animal Rescue Team off the Canaveral National Seashore in Florida.

The three sea turtles returned were part of the 72 sea turtles that were rescued last November during a mass cold stranding off the Massachusetts coast. They were transferred to SeaWorld Orlando from the New England Aquarium by the U.S. Coast Guard for rehabilitation and expert care.

Following today’s return, only 9 of the 72 rescued turtles remain after completing rehabilitation under the care of SeaWorld Orlando’s aquarium team and veterinarians. The SeaWorld Team is still caring for the remainder of the turtles as they regain their strength with the goal of returning them in the coming weeks.

Ranging from 4.5 to 6 pounds at the time of rescue, the turtles have been thriving during their rehabilitation, gaining strength and weight. The three Kemp’s ridley sea turtles returned today all weighed roughly 9 pounds each.

Kemp’s ridley sea turtles are the most endangered species of sea turtle in the world, mainly due to egg collection and other human activities.

So far in 2015, SeaWorld Orlando has rescued 39 sea turtles and returned 63 to the ocean.