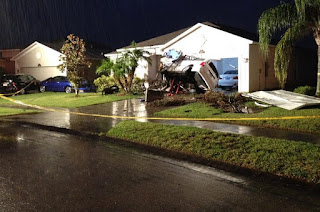 VIERA, Florida - A van struck a house in Viera, Florida just before 5 a.m. on Sunday.

According to the Florida Highway Patrol, 26-year-old Richard Lucas of Palm Bay, Florida was driving a 2014 Chrysler van on Indigo Crossing Drive at a high rate of speed when he lost control of the vehicle.  The van then left the roadway and struck a parked car at a one residence in the 5800 block of Indigo Crossing Drive. That initial impact then pushed the parked car into a neighboring yard where it struck another parked vehicle.

After the initial collision, the van overturned onto its side against the garage of a house, briefly trapping Lucas. Brevard County Fire Rescue crews were able to temporarily stabilize the van and the house structure.  Lucas was then transported to Holmes Regional Medical Center in Melbourne, Florida.  None of the occupants of the home were injured, according to BCFR. The building department will assess the home for structural integrity before the vehicle is removed.

FHP says that this accident was preceded by another hit-and-run accident nearby in which Lucas was also involved. FHP troopers have drawn Lucas' blood to determine a blood alcohol level.  The crash remains under investigation and charges are pending. 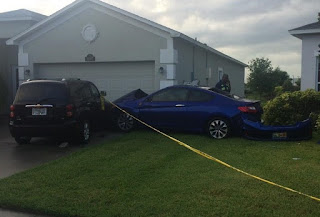 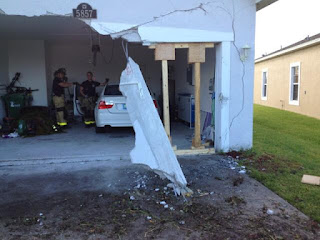