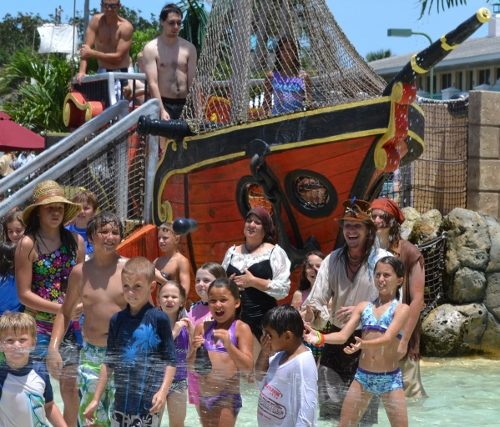 Kids will have fun with an interactive treasure hunt and can watch or participate in a water cannon battle in a large knee-deep pirate themed pool. Those who keep a weather eye, may even see a beautiful mermaid basking in the very same pool.

New this year, there will be even more kids activities courtesy of Fun 4 Space Coast Kids, Macaroni Kid of North Brevard, and Space Coast Kids Discovery Center who will invite children to dig for treasure and will also be bringing out their very own kid friendly pirate ship. Also new to the festival this year, there will be an opportunity for kids and adults to show their marksmanship and compete using fully functional and kid safe crossbows. While many interactive activities are free, some do require a small fee or a welcomed donation.

Celebrity artists Don Maitz, creator of the Captain Morgan Spiced Rum Character and Michael Noles who is famous for his decades of work with Disney. Both artists will be on hand in the Dolphin Room signing autographs and selling their artwork. Don Maitz will be signing event posters while supplies last.

This 4th Annual family-friendly event is geared up to entertain scallywags of all ages. All of the fun and excitement is packed into a single day this year. Organizers say that traditionally, this pirate festival is a 3-day event held on Father's Day weekend, but is currently being restructured with plans to expand into a major event next year, possibly utilizing the adjacent Lori Wilson Park

Festival Admission is Free - though a voluntary $2.00 “Buck-N-Ear” admission is appreciated.