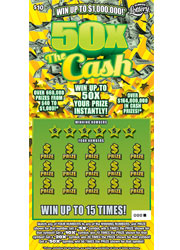 MELBOURNE, Florida - Richard Nicolosi, of Melbourne, claimed a $1 million top prize in the 50X THE CASH Scratch-Off game at Florida Lottery headquarters in Tallahassee, the Florida Lottery announced. Nicolosi purchased his winning ticket on his way to Disney World just one day shy of his 56th birthday.

Nicolosi chose to receive his winnings in a one-time, lump-sum payment of $728,487.20. He purchased his winning ticket from a 7-Eleven located at 3100 North Wickham Road in Melbourne, Florida. The retailer received a bonus commission of $2,000 for selling the $1 million winning ticket.