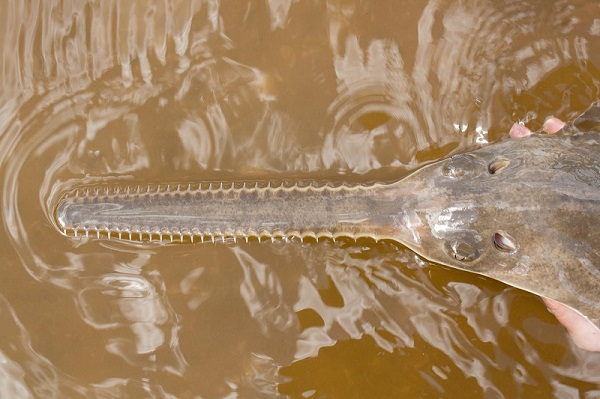 Researchers have recently discovered that some female small-tooth sawfish are reproducing in the wild without the need of male sexual partners.

Smalltooth sawfish are one of five species of sawfish, a group of large rays known for their long, tooth-studded rostrum that they use to subdue small fish. The researchers say that sawfish could be the first family of marine animals to be driven to extinction due to overfishing and coastal habitat loss.

Historically, the smalltooth sawfish inhabited the western Atlantic Ocean from New York to central Brazil, including the Gulf of Mexico, and the eastern Atlantic along the central west coast of Africa. The species was once common on both Florida coasts, especially in the late 1800s and early 1900s. In the late 1800s, a fisherman on the east coast reported capturing 300 sawfish in the Indian River Lagoon during one season.  When commercial netting became more prevalent, fishers often accidentally caught sawfish because the rostrum (saw) can easily become entangled in nets.

Now, smalltooth sawfish are no longer found throughout their full historical range and are mainly found today in a handful of locations in southern Florida, including the Caloosahatchee and Peace Rivers.

Earlier evidence that vertebrates might sometimes reproduce without a mate via a process called parthenogenesis had primarily come from isolated examples of captive animals--including birds, reptiles, and sharks. In those instances, the animals in question surprised their keepers by giving birth despite the fact that they'd had no opportunity to mate. In addition, researchers recently reported two free-living female snakes, each pregnant with a single parthenogen, but it was not known if these embryos would have lived in the wild. Therefore, no one really knew if this phenomenon took place to any significant extent in wild populations.

Demian Chapman of Stony Brook University in New York and his colleagues from the Priztker Laboratory at the Field Museum of Chicago and Florida Fish and Wildlife Conservation Commission made the discovery that vertebrate parthenogens can and do live in the wild after conducting some routine DNA fingerprinting of smalltooth sawfish in a Florida estuary. The researchers' DNA analyses show that about 3% of the sawfish in their studies are products of this unusual form of reproduction.

"We were conducting routine DNA fingerprinting of the sawfish found in this area in order to see if relatives were often reproducing with relatives due to their small population size," says lead author of the study, Andrew Fields, a PhD candidate at the Stony Brook University's School of Marine and Atmospheric Science. "What the DNA fingerprints told us was altogether more surprising: female sawfish are sometimes reproducing without even mating."

Parthenogenesis is common in invertebrates but rare in vertebrate animals, the researchers explain. Vertebrate parthenogenesis is thought to occur when an unfertilized egg absorbs a genetically identical sister cell. The resulting offspring have about half of the genetic diversity of their mothers and often die.

"There was a general feeling that vertebrate parthenogenesis was a curiosity that didn't usually lead to viable offspring," says Gregg Poulakis of the Florida Fish and Wildlife Conservation Commission, who led field collections of the sawfish.

And yet the seven parthenogens the researchers found appeared to be in perfect health. All of the animals were tagged and released back into the wild as part of an ongoing study of sawfish movements.

"Occasional parthenogenesis may be much more routine in wild animal populations than we ever thought," says Kevin Feldheim of the Pritzker Laboratory at the Field Museum of Chicago, where the DNA fingerprinting was conducted.

It's possible that this form of reproduction occurs mainly in small or dwindling populations. The researchers are now encouraging others to screen their DNA databases in search of other hidden instances of vertebrate parthenogens living in the wild.

As for smalltooth sawfish, it's possible this ability could keep them going for a little longer. But it won't be enough to save them.

"This should serve as a wake-up call that we need serious global efforts to save these animals," Feldheim says.