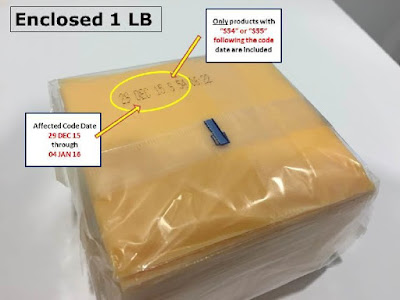 The Kraft Heinz Company announced that it is voluntarily recalling 36,000 cases of Kraft Singles individually-wrapped slices due to the possibility that a thin strip of the individual packaging film may remain adhered to the slice after the wrapper has been removed. If the film sticks to the slice and is not removed, it could potentially cause a choking hazard.

The recall applies to 3-lb. and 4-lb. sizes of Kraft Singles American and White American pasteurized prepared cheese product with a Best When Used By Date of 29 DEC 15 through 04 JAN 16, followed by the Manufacturing Code S54 or S55.

The S54 and S55 codes refer to the two production lines on which the impacted product was made. The Best When Used By Date and Manufacturing Code are stamped on both the larger 3-lb. and 4-lb. boxes and the enclosed individual 1-lb. packages.

There have been 10 consumer complaints to date about the packaging, including three reports of consumers choking.

"We deeply regret this situation and apologize to any consumers we have disappointed," the food conglomerate stated in a press release. "Consumers who purchased this product should not eat it. They should return it to the store where purchased for an exchange or full refund. Consumers in the U.S. and Puerto Rico can also contact Kraft Heinz Consumer Relations for a full refund, at 1-800-432-3101, Monday through Friday, 9am to 6pm Eastern." 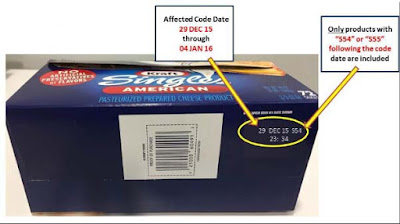 The following products are being recalled: