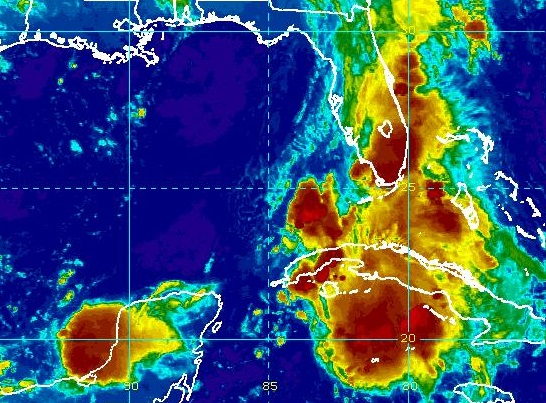 UPDATE: Tropical Storm Erika, and the remnants of Erika, have disintegrated. However, local flood watches are still in effect due to drenching rains.

MIAMI, Florida --  As of 8:00 a.m. Eastern Daylight Time on Sunday, August 30, 2015, NOAA's National Hurricane Center in Miami, Florida has issued its tropical outlook due to the presence of the remnants of Tropical Storm Erika, the fifth named storm of the 2015 Atlantic Hurricane Season.

A trough of low pressure associated with the remnants of Erika is producing areas of heavy rain over portions of south Florida, the Florida Keys, and Cuba. Although there are no signs of redevelopment at this time, upper-level winds could become marginally favorable for tropical cyclone formation over the next day or so.

Forecasters with the National Hurricane Center say that this system has a low chance (20%) of becoming a tropical cyclone again within the next 48 hours and a 30% chance of regeneration over the next five days.

Regardless of this system's prospects for regeneration, locally heavy rains and gusty winds are expected to spread northwestward and then northward across Florida and the eastern Gulf of Mexico later today and Monday.  Flood watches are in effect for most of the Florida peninsula.