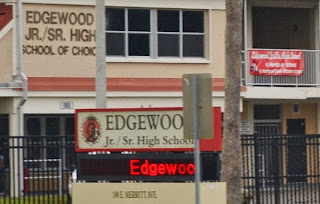 West Shore Jr./Sr. High School was ranked 65th in the nation out of roughly 24,000 high schools on the 'absolute' list, and for the second year in a row, West Shore was recognized as the #1 public high school in the state of Florida.

“Take a bow Wildcats, as this is indeed a very prestigious and distinct honor for our school and it is an effort that our entire school community can be proud of,” said Principal Rick Fleming.  “Needless to say, it takes a tremendous effort from our students, teachers and staff, and parents to build the sustained success that West Shore is well-known for.”

Edgewood Jr./Sr. High School was ranked as the #2 public high school in Florida and 155th of all high schools in the nation.

Edgewood and West Shore are the only two 'choice' high schools in Brevard County where parents pay a $30 application fee for a chance for their child to be picked in an enrollment lottery. Both schools have very low poverty rates (10.6% and 9.1%, respectively) when compared to school aged children in the rest of Brevard County (20.2%) and the State of Florida (23.5%).

Marijuana Use On College Campuses Highest Since 1980

How to Protect Your Child's Information At School