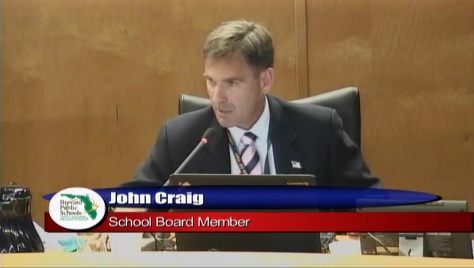 "Last night I was contacted by one of the School Board members and requested that we not make a decision on this impact fee," said Brevard County Commissioner Jim Barfield at the October 6th Commission meeting. "The reason being is that the have a new superintendent now and that the School Board hasn't actually approved all of this yet. So, I would like to table this for 90 days. And I'd like to make that in a motion"

"I also had a conversation with two of the School Board members who had a concern," said County Commission Chair Robin Fisher. "I think this thing was probably brought before us when Mr. Bingelli was here and was one of his last things that he wanted to do. I'm not sure that the current Board is totally in agreement with this. And I've got some concerns that this might be the cart before the horse. So, I'm not comfortable with it. And so, I'll support your motion. I think it is longer than a 90-day decision, I think it is probably a year out or so." 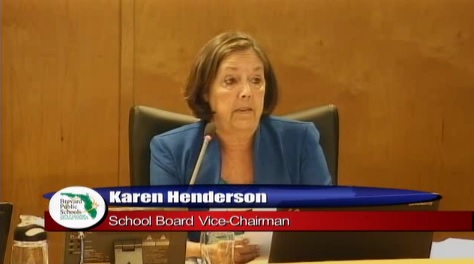 The County Commission's decision to table the impact fee for 12 months based on two School Board members contacting Commissioners just before their vote drew criticism from School Board Member Karen Henderson at Tuesday's School Board meeting.

"Last week, the Commissioners voted against the recommendations of the impact fee advisory committee that met twice, that was populated by a member of every city in our county, and also against the local planning authority (which has member on it from every city in the county)," said Henderson. "And I feel they did it against the will of most of the Board members."

"From my perspective, I would think that committees that were from all cities in the county would hold some weight, and they all voted unanimously. But, we had, according to the reports that was in the paper (and we know how the paper is),  but it said that two members offered what they considered last-minute suggestions to vote no on the recommendation of the school district, and against the impact fee advisory and the local planning authority. They spoke to two Commissioners."

Henderson asked, "Mr. [BPS Facilities Assistant Superintendent Dane] Theodore, can you please tell me if you knew this was coming? Were you aware that any Board members had an issue with this?"

"I was not," Theodore replied.

"So that came as a surprise," said Henderson.

"... So basically, to those people who called me and wanted to know," Henderson said later. "The process was in place, I had no idea. This process has been going on for six months. I had heard nothing. I was asked why didn't I go over and fight for it over at the school board. I didn't know there was an issue. I assumed that after six months of this and sixteen Board meetings between March 31st and last week that we could have had some public discussion. But it wasn't there..."


"Yes, we had a workshop back in March. Yes, we discussed this," Craig said in response to Henderson's statements. "I had very specific questions of both of Finance and of Facilities at that time. They've been on the Board items for some time. And every time I've ask Finance it keeps getting pushed off for another month. And I've asked many times."

"So there is no surprise, I don't think, from either Mr. Theodore, or I know from Ms. [BPS Finance Assistant Superintendent Judy] Preston, that I've had specific questions about how we came to this. What the other options are.  What the return on investment of all those options are. And what discussion are we going to have to make sure that those options bring forth to this community using their tax dollars - are the right ones. Not only for the taxpayers, but for obviously, eventually, for the children. I brought those constantly to them. Those questions have still not been answered."

"If we are going to take more money from our taxpayers, we better have a plan, and a darn good one, to use it. And our Superintendent has not weighed-in on that plan. I haven't been in a meeting yet where we discussed that as a group, and what his long-term vision is," continued Craig.

"So yes, as both a taxpayer and as a Board member, I reached out to a couple people," admitted Craig. "And asked them, "Hey, is there any chance that you could just hold off for just a short time so that we can make sure that we have a plan that we can bring to you," instead of just asking for money and going, "Hey, you know what? We think we know what we are going to do with it, we're not quite sure. In the paper it says we are going to build schools, we said that really we may or may not build schools, it's not a done deal yet, and that has been noted as well.""

"So yes, I made those requests to them. Whether they acted on them or not is totally up to them. I wasn't sitting there twisting their arms to make them to do so. I think it was the right thing to do. I think that it was the responsible thing to do - to let our Superintendent weigh-in, have a plan that is his own plan. And that he is comfortable with, before we start asking for more money. Just to take money to then put it aside. I haven't seen the restricted account built yet in our budget that that money was going to go into (and it was coming in on January 1st). It certainly wasn't in the forecasted budget for exactly how it was going to be restricted funds. Many of those that questions were asked back in March."

"So, absolutely, I asked that they delay it. It might be absolutely the right thing to do - I don't know. I don't know what our Superintendent believes yet. And this needs to be his plan - not the last Superintendent's plan that was discussed in the last half of a workshop back in March right before he resigned."