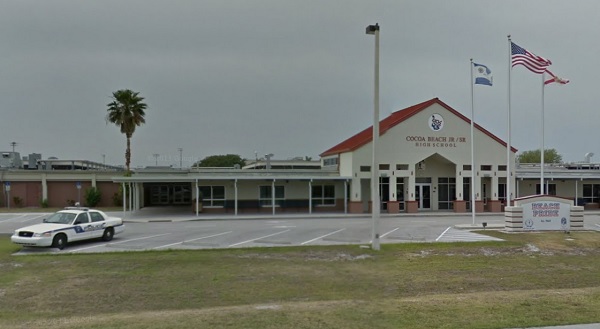 COCOA BEACH, Florida - A 17-year-old former Cocoa Beach Jr./Sr. High School student was arrested Wednesday morning for allegedly making a threat to disrupt the orderly conduct of the school campus and cause harm to other students.

Cocoa Beach Police received information found on social media about the threats allegedly made by the Sebring, Florida teen.  According to C.B.P.D. Major Scott Rosenfeld, investigators then conducted interviews and developed credible information to prepare an arrest warrant for the teen.  Shortly after the warrant was signed, the Highlands
County Sheriff’s Office took him into custody without incident.

The teen was charged with the "Threat to Throw, Project, Place, or Discharge Any Destructive Device," a second degree felony, and is being held out-of-county on a “no bond” status awaiting transfer to Brevard County, Florida.

Police say that the investigation is still active and ongoing.