Brevard County School Board Votes 3-2 To Raise Own Salaries 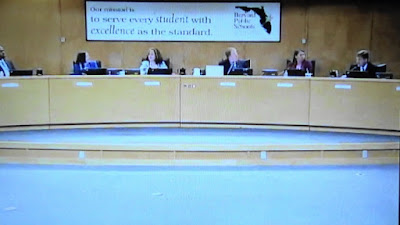 VIERA, Florida - The Brevard County Public School Board voted 3 to 2 to raise their own salaries from $37,840 to $39,226, the same rate as Brevard County first-year teachers' salaries. School Board members Amy Kneesy, Karen Henderson, and Andy Ziegler voted for the increase while Misty Belford and John Craig voted against the salary increase.

"In previous years, the Board has always agreed to freeze the salary of the School Board members at the same level as a beginning teacher," said Belford. "My concern with that is, this year, we gave beginning teachers a pretty hefty raise. And it just doesn't sit well with me that there is the potential for it to be construed as 'we gave teachers a healthy raise, and we are benefiting from our decision to give those teachers a healthy raise.'"

"I don't believe a single board member up here was thinking in their mind that when we were discussing what we were going to give for raises to staff, that we were thinking about ourselves," Ziegler later responded to Belford's concern. "That's just a byproduct of what happened."

"I think what we do to educate children and the decisions we make here are as every bit as important and valuable as our County Commissioners," argued Kneesy in support of the salary hike. "They're making $58-59,000 over there. I'm not asking to make that. I'm asking to make $39,000. I don't have an office. I don't have a staff. My office is a laptop computer and a cell phone. I answer my own correspondence. I answer my own phone. I'm making $20,000 less than a County Commissioner. And I don't think it is too much to ask for to make $39,000 a year."

"This is my full-time job, that's why I approach it with a full-time salary,"  Kneesy said. "Anything less than a full-time teacher's salary I see as an insult to the job that we do. And so, I could not support anything less than a full-time teacher's salary because I look at what the job we do here is ... We do ourselves a disservice if we continue to in these determinations, to lower our own credibility. Where do we draw that line at? What do you think your value is John, in terms of a School Board member? What is your value?"

"To respond specifically to your question about what I think is the value of my time, and me, as a School Board member," Craig said to Kneesy. "First of all, pays does not define my value. And if you are doing it for the pay and you think pay defines your occupation, then I'd suggest that maybe you would go find something else. I'm sorry - but that's a leadership thing. Pay does not define your occupation. You, and what you do inside the position, defines your leadership style and your occupation."

"This is my full time job. I don't have three or four other jobs or retirements or anything else coming in, that other people might have," said Henderson. " ... There has been a few decisions up here. You know, you want to talk about $7,000 here or there, but there's been a few decisions made by this board that has wasted way more than that."

Although the sales tax was presented to voters as earmarked solely for capital repairs and improvements, software, and security, the BPS administration reclassified many of its operating expenses as capital expenses. This reclassification freed up money in the operating budget for teacher raises, school board member raises, and other discretionary expenditures.