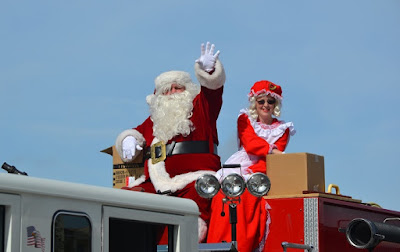 COCOA, Florida and ROCKLEDGE, Florida – The Cocoa/Rockledge Holiday Parade, "Bright Lights, Holiday Delights," will take place on Saturday, December 12, 2015, beginning at Rockledge High School at 6:00 p.m. and ending at Lee Wenner Park at approximately 7:30 p.m. where Santa will light the tree at the City of Cocoa’s Holiday Festival.

This year's parade is hosted by Mindy from “Mike & Mindy in the Morning” on Lite Rock 99.3, an iHeartMedia station.

Brevard County Parks and Recreation, in conjunction with the City of Rockledge and the City of Cocoa Police Departments, will begin closing select streets starting at 5:30 p.m. until about 9 p.m. on Saturday, December 12, 2015, for the parade.

The parade route begins at Rockledge High School and heads north on Florida Avenue before taking a slight right onto Brevard Avenue near Oak Street. Continuing north, the route turns right at Maryland Avenue, then takes a left to head north on Delannoy Avenue. The route concludes by taking a right on Harrison Street, where the parade will end in the parking lot of Lee Wenner Park. Traffic will be re-routed to alternate routes in the area. Motorists wishing to drive through the area are cautioned to allow extra time.

Pedestrians are also encouraged to exercise caution along parade route. Special recognition will be given to the spectators that illuminate themselves and help us light up the night.

For additional information about the parade, please call (321) 633-1874. If you wish to participate in the parade, applications are available on our website under Forms and Documents at http://www.brevardcounty.us/ParksRecreation/Central.