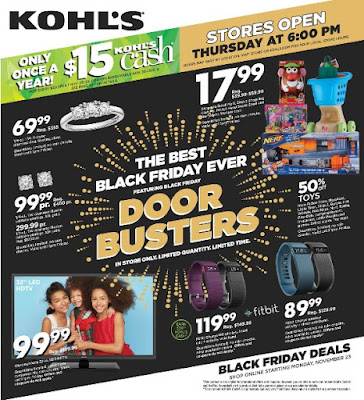 Although Kohl’s Department Stores won't open until 6 p.m. on Thanksgiving Day for its Black Friday deals, customers who want to get a jumpstart on their shopping lists can begin taking advantage of those Black Friday sales on Kohls.com.

As a bonus for those who prefer more traditional brick and mortar shopping and want to take advantage of Koh's in-store only doorbusters, the retailer is offering a Fandango promotional code for 2 free movie tickets for Star Wars: The Force Awakens to the first 100 customers when stores open on Thanksgiving.

Among the Black Friday deals are a selection of toys for only $24.99 which include:

To see all of Koh's Black Friday Sales and Doorbuster deals, view: