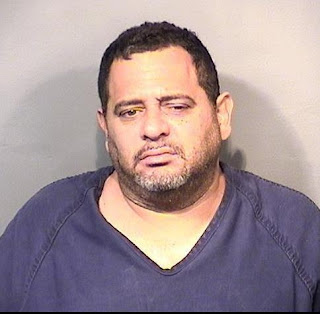 A concerned citizen alerted Melbourne polices officers, who were already on Harbor City Boulevard for an unrelated call, to a possible drunk driver. Officers then attempted a traffic stop after observing the vehicle strike a curb and display other driving patterns indicative of an impaired driver around 11:41 p.m. last night.

According to police, that's when 48-year-old Dennis Febles Vazquez fled the traffic stop and drove west on Eau Gallie Boulevard where police deployed stop sticks to disable two of the vehicle's tires. The vehicle finally came to a stop at Eau Gallie Boulevard and Wickham Road where Vazquez tried to flee on foot. A short foot pursuit ended with the use of a police Taser without further incident. Vazquez was later found to have felony and misdemeanor warrants, a previous DUI conviction, and a suspended license.
Labels: crime Melbourne