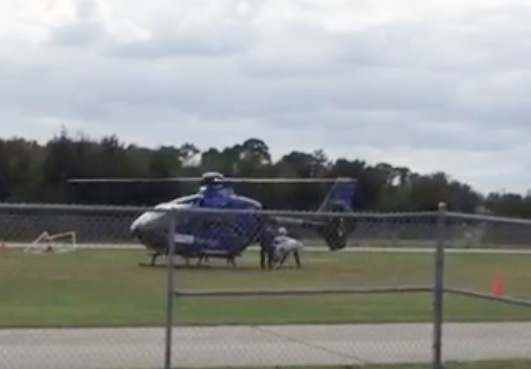 COCOA, Florida - A motorcyclist is hospitalized in serious condition with non-life threatening injuries following a midday collision with an SUV today.

Just after noon on Tuesday, Cocoa police  and Cocoa fire rescue crews responded to the intersection of Clearlake Road and Dixon Boulevard in Cocoa Florida after witnesses reported a vehicle crash involving an SUV and a motorcycle.

Police say that preliminary findings indicate the driver of the motorcycle, an adult female, was traveling northbound on Clearlake Road. Meanwhile, a southbound SUV was attempting to make an eastbound turn onto Dixon Boulevard when the SUV driver turned into the path of the motorcycle - causing the motorcycle to hit the side of the SUV.

The unidentified motorcyclist was wearing a helmet, police say. She suffered serious injuries and was flown to a nearby trauma center for treatment. Traffic crash investigators are reviewing video evidence taken from a citizen’s dashboard camera that captured the collision from a distance. The SUV was driven by a woman who had two children with her, including a 6-day-old infant. The occupants of the SUV were not injured.

“The driver of the SUV says she never saw the motorcycle,” said Sgt. Pat Dovale. “The victim is fortunate she was wearing a helmet. That alone probably saved her life.”