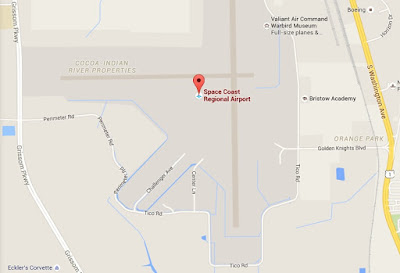 UPDATE:  A warrant was issued on Saturday for  Zachary Joseph Penna with the following charges: Felony Murder, Robbery With a Deadly Weapon, Attempted Carjacking with a Deadly Weapon, Armed Burglary of a Structure, Resisting an Officer with Violence, Use of a Deadly Weapon upon a Police Dog, and Aggravated Assault on a Law Enforcement Officer.


TITUSVILLE, Florida - A man suspected of committing two murders on Thursday in Palm Beach County stabbed a man and a police dog on Friday in Brevard County.

Just before 10 a.m. on Friday, Titusville police responded to a report of an armed robbery of a person on Perimeter Road in the southeast corner of the Space Coast Regional Airport.


When police arrived on scene, they discovered that an adult male victim, a contractor working on airport property, had been stabbed by another man who was later identified as 24-year-old Zachary Joseph Penna of West Palm Beach, Florida.


A Titusville Police K-9 Unit then confronted Penna who had fled into a wooded area on airport grounds when police arrived. A K9 Police Dog named "Jack," a 3-year-old Belgian Malinois, was stabbed by Penna during the confrontation. That's when K9 Officer John Cantalupo, a 10-year police veteran, then discharged his firearm to stop the deadly threat.


The K-9 officer who discharged his firearm was uninjured in the incident but was placed on administrative leave while FDLE investigates the officer-involved shooting, which is standard procedure.


Police discovered that a black Toyota SUV driven by Penna was the same vehicle taken from a residence in Greenacres, Florida in Palm Beach County where a double murder had occurred on Thursday.


The vehicle is also possibly connected to another robbery in Boynton Beach, Florida where an 86-year-old victim told police that she was walking from her home when a black SUV pulled up in front of her. The driver then exited the vehicle and grabbed her purse and pushed her to the ground. The woman was able to get the first two characters of the tag on the SUV - "G0" - which is the same first two characters of the tag in the Greenacres case.