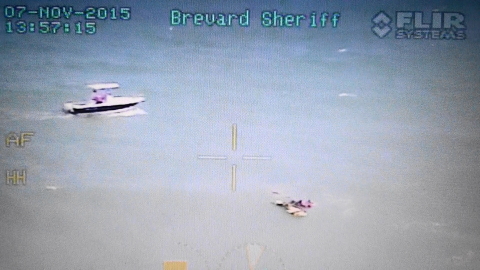 INDIALANTIC, Florida - A swimmer was rescued far from shore in the Atlantic Ocean off of the 900 block of North Highway A1A in Indialantic, Florida on Saturday.

The woman was spotted approximately a half-mile off shore with no flotation device and in apparent distress around noon. Brevard County Ocean Rescue lifeguard, Carlos Jenkins, began paddling out to sea to rescue the swimmer. Meanwhile, a Brevard County Sheriff's Office helicopter hovered over the swimmer. A Melbourne Police Department "Tactical Flight Officer," Bernie Bernardo, then deployed from the helicopter into the ocean to rescue the victim.

While Bernardo entered the water to steady the swimmer, the helicopter pilot, John Coppola, gained the attention of a Nathan and Stacy Shaw who were in a nearby boat. The Shaws were then directed to the immediate area of the swimmer.

Once the Good Samaritans' boat arrived near Bernardo and the distressed swimmer, both were brought onto the boat. After the two were aboard, the boat then rendezvoused with Jenkins who was approaching on the longboard. Jenkins was also brought aboard and the boat transported the swimmer and rescuers to just before the wave break. The swimmer and rescuers then departed the boat with the longboard and swam the remaining distance to shore.

The swimmer was then transferred to Brevard County Fire Rescue crews awaiting on the beach.  The woman was later transported to Holmes Regional Medical Center for medical attention.