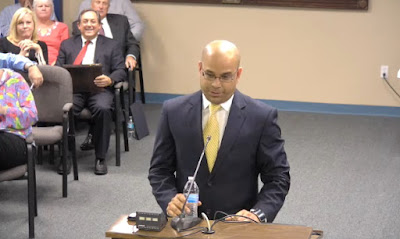 COCOA BEACH, Florida - In a 3-1 vote, Cocoa Beach City Commissioners appointed Ed Martinez as the next city commissioner to fill the vacancy created by outgoing Mayor Dave Netterstrom. Commissioner Mike Miller, the sole "no" vote, made it clear that he was not voting against Martinez, but instead was voting against the procedure the Commission took to select the finalists. Netterstrom was prohibited by City Charter from casting a vote on his replacement.

Martinez gave the Commission and the public his last pitch during the final round of candidates as to why he wanted to become the next City Commissioner.

"I gave this a great deal of thought - submitting my application for this seat. I spoke to my wife, friends, community members and business owners," Martinez said. "I was encouraged by a lot of them. And they gave me positive feedback - and instantly they provided me with advice, concerns, wishes, gripes, things that need to be fixed, as I am sure you all are aware of."

"My motivation is a simple one, gentlemen. I love this city. It's my home. I have two businesses on this street. I care about the small business in this community. As a member of the Cocoa Beach Main Street board, I am passionate about the promotion and the re-beautification of downtown Cocoa Beach. And I'm passionate about this city.It will be my honor to serve on this Board with you."

During public comments, residents asked that all the remaining candidates to disclose any conflicts of interest.

A little while later int the meeting, Commissioner-Elect Martinez cast his first vote, at least in spirit. Citing the little payback from the gas and sales tax revenue to Cocoa Beach, Martinez opposed any endorsement of the taxes by the City.

"If I had my vote. I would not endorse this. It's just simple economics," Martinez said.

The vacancy was created when Netterstrom tendered his resignation effective December 31, 2015. Martinez will fill the vacancy on the City Commission from January 1, 2016 to November 17, 2016.