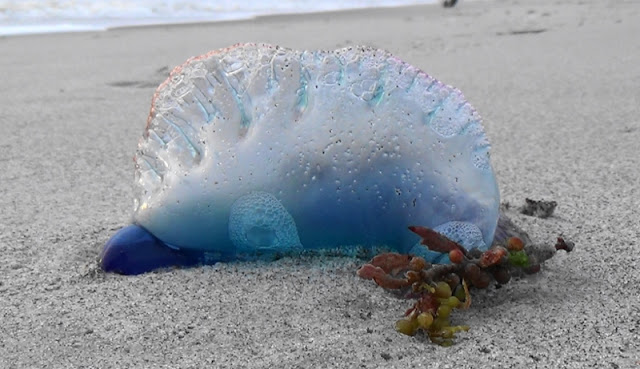 COCOA BEACH, Florida - Hundreds of stinging jellyfish have washed up along the beaches of Cape Canaveral and Cocoa Beach on Wednesday, December 23, 2015.

Below the sail are stinging, venom-filled tentacles that are designed to paralyze small fish but can also deliver a powerful sting to humans who wade into the water or play on the beach.

In addition to its painful sting, Portuguese Man-of-War can cause life-threatening allergic reactions in some people. The stinging can be relieved with vinegar, which is often kept at lifeguard stations in Brevard County, Florida.

Prevailing easterly winds for the last few days have blown the Portuguese Man-of-War ashore along with floating trash and dead Herring that started dying off and washing up along Brevard County beaches last week.

Many of the items, such as cooking oil containers, are believed to have originated from a barge that lost several containers overboard earlier this month.

In addition to its painful sting, Portuguese Man-of-War can cause life-threatening allergic reactions in some people.

The Florida Department of Health advises people to do the following if stung by a jellyfish:

1. Leave the water immediately if stung.

4.  Don't try to remove spines or tentacles with bare fingers. Use tweezers or the edge of a credit card to “shave” the stingers off.