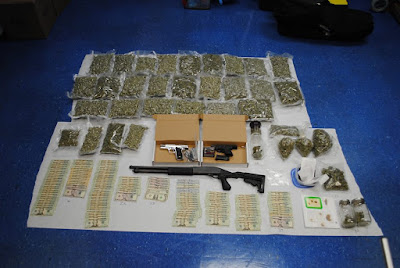 On Wednesday, Community Resource Officer Nicole Chapman conducted a drug investigation in the 2700 block of Fountainhead Boulevard after police received a community complaint of drug activity occurring at this location.

During the course of this investigation, Officer Chapman reported detecting the odor of marijuana coming from the residence and notified the Melbourne Police Department Special Investigations Unit. Detectives responded to the location and obtained probable cause for a search warrant.

After discovering 28.47 pounds of marijuana, 37 grams of cannabis wax, 1 gram of LSD, 2 handguns, 1 tactical shotgun, and $3817.00 in the residence, police arrested 23-year-old Richard Michael Bencivenga and 22-year-old Brandon David Wilson, both of Melbourne, Florida, who were  charged with trafficking cannabis, possesion of a firearm while committing a felony, and possession of drug paraphernalia.

"This is a clear example of the community working with the police department to solve problems within our neighborhoods," said Melbourne Police Chief Steve Mimbs.
SIMILAR STORIES: