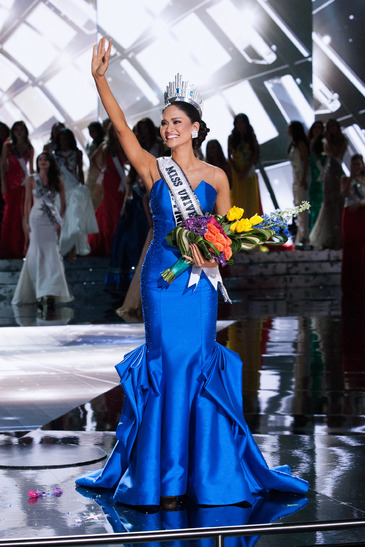 Harvey then interrupts the celebration by saying, "O.K. folks, I have to apologize." The crowd and contestants then laughed given Harvey's reputation of making jokes during his performances. "The first runner up is Colombia," Harvey continued, which was met with screams, gasps and boos from the audience while Miss Phillipines stood wide-eyed in shock. "Miss Universe 2015 is Phillipines," Havey announced as the grand finale music was cued a second time.

Miss Philippines then walked back to center-stage where Miss Colombia bent down for the Miss Universe crown to be removed from her head and placed upon Miss Philippines' head.

"Everything happens for a reason, so I'm happy," said Miss Colombia Ariadna María Gutiérrez Arévalo backstage video as she wiped away tears.